Note: This strategy guide only works reliably on the blitzball games you play AFTER the tournament game against the Goers, as I discovered when I played through the tournament a few months ago. An updated, tournament-specific guide can be found here. Fucking Goers.

This is a public service announcement.

Gamers, we love Final Fantasy. Everyone should play lots of it. Unfortunately, many Final Fantasy games are plagued with an unpleasant and incurable condition that I like to call Shitty Mini Games.

Such is the case with Blitzball.

Well, today RPG Rabbit is here to tell you how to make this shittiest of Shitty Mini Games a slightly less shitty experience.

You see, the problem with Blitzball is that not only is it a certifiably Shitty Mini Game, but it is also a Shitty Mini Game that you lose constantly. Meaning you have to keep PLAYING the Shitty Mini Game. The more you win, the less you have to play. So allow me to share with you the exploit that will allow you to win almost any Blitzball game you play, including the plot game with the Luca Goers. It may take a couple of tries with the Goers because every single one of your players except for Tidus sucks ass, but I know it’s doable because I’ve done it.

Step one, get the Jecht Shot. This will not work unless Tidus gets the Jecht Shot. So make sure you SAVE right before you get on the boat to Luca because of course you have to play a whole SEPARATE Shitty Mini Game to get the Jecht Shot in the first place. So you may have to reload the game a few times, because it’s a little tricky. 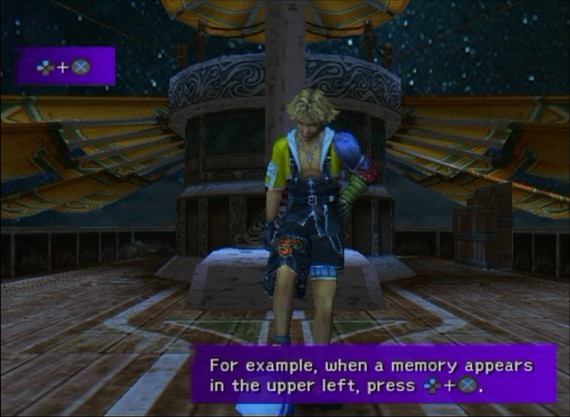 Once you’ve defeated Tidus’ angst and unlocked the move, you now have to power to win…after the first half of the game. Going into the first game against the Luca Goers, Tidus doesn’t have a high enough level as a Blitzball player to even equip the Jecht Shot. Ugh. So when the game starts, hope your team gets the ball first. If the Goers get it first, they will probably score. Hope is not lost if they do, it’s just annoying. Once your team gets the ball, get it to Tidus. Just having him swim while holding the ball will give him EXP, so he should be able to level before the second half. But you don’t want to try and score yet, because the damn Goers will probably block it without the Jecht Shot, and you don’t want to let the damn Goers steal the ball away by ganging up on you an tackle-raping you, either.

So just swim Tidus behind your own goal.

Just hang out there. The opposing team’s AI won’t follow you. This will allow you to keep them from scoring until the second half of the game. At halftime, you can finally equip the Jecht Shot. Hope your team gets the ball at the toss up. If the Goers get it again AND score, you’ll probably need to reset the game to your last save. At least during this first game, it’s going to be next to impossible to score enough to beat them if they score twice before you can. If your team gets the ball, get it to Tidus. Swim behind your own goal again. Now wait. See the mini map with all the triangles?

Wait until you see the red triangles form a line. This is your opening. Swim up towards the opposing goal. The line formation means that you will most likely only have a maximum of two blockers between you and the goal, and you can Jecht Shot their asses into oblivion. Once you have a higher score than the other team, simply get the ball, swim back behind your goalie again, and hide there until the game is over.

This strategy works, but it can be tricky in this first game because you only have three minutes in the second half before Wakka returns and takes Tidus’ place, and without the Jecht Shot, Wakka is much less likely to score. Any game other than that first, really unfair game against the Goers, though, and you’re golden.

There are lots of other strategies out there, but this is what works for me. Give it a try, see if you can beat that Shitty Mini Game!