You may have noticed that the top of this blog looks way more awesome than it usually does. Yes, that is indeed a bunny rabbit cosplaying as Yuna. Thanks to the wonderfully talented graphic artist, Emily Kohler, this blog is over 9000 times shiner. Check out her website! She does great work.

In other news, my husband picked me up a copy of Professor Layton and the Unwound Future recently. I played Curious Village and Diabolical Box ages ago, and I forgot how much I loved these games. They’re such a weird combination of  relxation and extreme frustration as you mosey around London, drink tea, talk to wacky people, and get your brain twisted into knots by logic puzzles.

I’ll write a more complete review at another time, but I wanted to leave you with a very important observation. 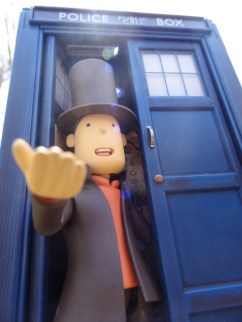 NO SERIOUSLY, the resemblance is uncanny! look, here’s the Ninth Doctor in a top hat.

I rest my case. Herschel Layton is a Time Lord.

RPG Rabbit Plays Some Demos, Freaks Out About a New JRPG Involving Fairies

One of my favorite things about owning a console that can connect to the internet is the capability of downloading demos for games. There is nothing more effective at making people excited about your game than letting them play it for a little bit. Last night, I got to sit down with two PS3 demos, and I had a lot of fun playing them.

I downloaded the Abyss Odyssey demo for one reason: it’s published by Atlus, who is hands-down my favorite publisher. As someone who loves weird Japanese games, Atlus is near and dear to my heart. They regularly take risks to localize and market super-niche, oddball video games that might not ordinarily make it out of Japan. Also, they publish the Shin Megami Tensei games, which I have mentioned before as a deep and abiding passion of mine, and a close tie with Final Fantasy as my favorite game franchise of all time.

I had zero expectations of Abyss Odyssey. I kind of assumed it would be an RPG, as Atlus publishes a lot of RPGs, but I was surprised to discover that it was in fact some kind of strange side-scrolling, combo-based, beat-em-up, platformer thing with roguelike elements. Oh, it also has a really beautiful and unexpected Art Deco visual style that I found immensely appealing. Interestingly, the game was developed by ACE Team, a game developer based in Chile of all places!

I was immediately thrilled that the playable character was not only a lady, but a lady who is dressed in some very stylish and not-super-revealing clothes! Also, listen to Katrien talk:

HOLY SHIT IS THAT MOTOKO KUSANAGI.

YES, IT CLEARLY IS.

Although I couldn’t find any confirmation of the voice actor’s involvement in the game, I am pretty damn sure that is Mary Elizabeth McGlynn. Atlus uses a lot of anime voice actors pretty frequently (especially my personal favorite, Liam O’Brien!), so it seems probable. Score another point for this game!

Abyss Odyssy gets lots of points for style and presentation, but its substance, while interesting and briefly diverting, wasn’t enough to make me want to buy the game. It’s pretty button-mashy, and although it looks like there’s some room for ability customization, the demo didn’t make it seem like a particularly deep system. More of a problem for me was the sketchy, uninteresting story. Seriously, check out the Wikipedia page I linked to above – the story synopsis is literally three lines long. For someone who mostly plays games for the stories they tell, that was kind of a deal-breaker. It’s really pretty, though! If you like fighty games, it might definitely be worth your time and your investment of $14.99.

I have no idea how I missed the fact that this game was a thing. Beyond: Two Souls heavily involves two very famous actors, one of whom is Ellen Page, and I LOVE Ellen Page! She’s so adorable and snarky and nerdy! So I feel like there must have been some sort of intense advertising blitz that I somehow managed to avoid, but whatever, there was a demo, and I downloaded it!

And holy shit, wow, what an experience.

I feel like this kind of interactive experience is ever-so-slightly distinct from what many people would consider a “game,” although I’m not 100% sure where that distinction really falls. Certainly, this is much closer to the “movie” end of the spectrum than a traditional video game with all of its expected fiddly bits like stats and a health bar and equipment and what have you, but I was completely sucked into this demo in a visceral way that far eclipses any movie watching experience I have ever had.

It was…intense. I found myself literally yelling at the screen almost the entire time. “WATCH OUT, ELLEN PAGE! OH SHIT, ARE YOU OKAY?? NO, NO, DODGE THAT LOG!”

I know the character had a name in the context of the world of the game, but I can’t actually remember it now. The motion capture was eerily accurate and the voice acting so good that I was sold on the idea that the digital being before me was actually Ellen Page. No unexpected visit to Uncanny Valley here, no sir, this was ACTING.

All of the “gameplay” consists mostly of quick-time directional button presses, but for all its simplicity, I was absolutely THERE in a way that I found incredibly engaging. It helped that the story is really very interesting, with a lot of mystery that I found myself quite excited about unraveling. To be fair, things do get more “game-like” when you control the mysterious entity called Aiden, and the controls for its part of the game are actually really tricky to use and a little bit frustrating. I actually found that my difficulty in controlling Aiden made the game even more immersive, because a huge part of the plot seems to center around Ellen Page’s lack of control over Aiden and Aiden’s lack of control over itself. After all, if you were a non-corporeal being trying to interact with a corporeal world, wouldn’t you have a whole lot of trouble? Wouldn’t you constantly be falling through solid matter and overshooting the mark of your intended targets because you aren’t affected by friction? I really felt the frustration at having all this power and ability but so little control. It was excellently implemented!

I will most DEFINITELY buy this game. Probably right not this very minute, because $40 is a lot of dollars for me, and perhaps I will wait for a Black Friday sale or for enough Powerup Rewards points for a coupon, but I WANT this game. I need to know what happens to Ellen Page! 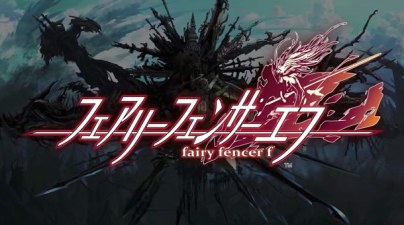 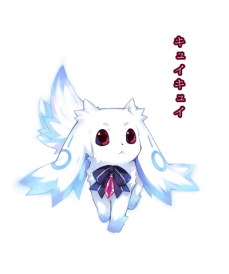 WHAT ARE YOOOU? I don’t care, actually, just come home with me and be adorable forever!

HOW DID I NOT KNOW ABOUT THE EXISTENCE OF FAIRY FENCER F? I love fairies! And JRPGS! And Uematsu! And cute things, especially cute things. The trailer from Game Informer looks really cool. I really, really hope the game is as cool as it looks. I’ve been burned by adorable-looking JRPGs before. Let’s keep our fingers crossed!

They gallop gracefully over the plain.
Their yellow feathers shine under the sun.
Under their golden flanks, their muscles strain
To bear their riders proudly as they run.
These noble steeds, whose work is never done,
Unlock steep paths o’er mountains, seas and snow,
Protecting riders from foes they outrun.
Where airships dare not land, they bravely go.
What name is theirs, what title, dost thou know?
What noble word can encompass their might?
I’ll tell thee straight, that name is “chocobo,”
That princely bird, so favored in God’s sight.
O, tremble at their coming, O! and hark
To hear them sweetly sound their stately “wark!”

As I recall, I only got a C on the assignment, because, as my professor explained, “Sonnets are traditionally about love.” Well, screw that! I LOVE CHOCOBOS.

The joke was on him, though, I got the sonnet published in the Letters section of a 2008 issue of Game Informer.