Yes, I know that GameStop is evil. Unfortunately, they also have a lot of cool shit for sale, and some of that cool shit is cool shit that no one else sells. I offer as proof of this theory of cool shit the recently-released Hyrule Gold Edition of the New 3DS XL. Well, damn. That is one attractive piece of console hardware. I had promised myself that I would not upgrade to the newest generation until an exciting enough model appeared. Lo and behold, such a thing had appeared. Shiny, shiny gold featuring a beautifully-detailed etching of the Wingcrest? I could not resist. Since the damn thing was both a “GameStop exclusive” and a “limited edition,” I feared that if I waited on this too long, I would not be able to snap one up before they became only available on eBay at exorbitant prices. Besides, GameStop was running a deal! If I traded in my old 3DS, I’d get $100 towards a New 3DS XL! Awesome! And I could transfer all of the data from my old 3DS to my New 3DS! Rad!

Oh, wait, except that I needed both the old and the new system to make the transfer? And I couldn’t trade in the old system without making the transfer first? This was a veritable Ouroboros of a transaction. So I turned to my best friend, the Internet, to solve my dilemma. The Internet delivered an answer of jackass proportions.

Step One: Go buy a New 3DS at full price from GameStop. Take it home.

Step Two: Transfer your data from your old 3DS to your New 3DS. This will take more than two hours.

Step Three: Take both the New 3DS and your old 3DS back to GameStop the next day. Return the New 3DS. Trade in the old 3DS. Immediately re-purchase New 3DS.

I have followed these steps. I purchased a New 3DS. 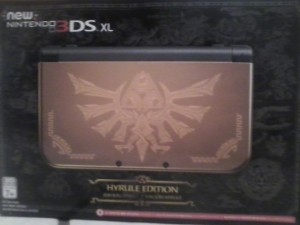 I had to admit, it looked even better in person than it did on the box. It is a most pleasing shade of gold and has a slightly different profile than its predecessor.

I then spent a great deal of time waiting for the data transfer to take place.

This was tedious, but at least I could distract myself with a delightful little animated representation of tiny Pikmen fragmenting and rebuilding my files. I mean, I could if I had no life. I read a book instead.

Tomorrow, I get to trek back to GameStop to wave my receipt, return, trade-in, and repurchase this console that I have already customized to my liking in an utterly ridiculous dance of bullshit. What makes this particularly irritating is that it is demonstrably unnecessary. Nintendo is able to remotely restore your account in the event that your 3DS is stolen, and assuming that you have backed up your save data, the new system will function as your old one. The one difference is that you will have to re-download software from the eShop, but that seems slightly more convenient than multiple trips to GameStop and an impressively convoluted merchandise shuffle. Oh, Nintendo. You are like a beloved, elderly uncle that gives us neat presents, but then makes us sit through an interminable, recursive story that is a tedious waste of everyone’s time. This metaphor, though apt, may be slightly labored.

After the transfer, I was pleased to discover that when I opened my New 3DS, it looked like my old system had been cloned. Every program was where it belonged, all my data secure, all matters in order. It was as if the soul of my old 3DS had leapt into a new, more vigorous body. I can’t believe I am waxing poetic about a game system. It was pretty cool is what I am saying.

Is the upgrade worth it? It would be worth it alone for the improved 3D experience. Infrared cameras are able to track your head movements and adjust the 3D accordingly, meaning that you no longer have to hold the system completely still in order to achieve the optimal optical illusion. It makes playing games in 3D for long periods no longer a chore. It’s kind of magical. I have noticed that things load faster, though it’s not such an improvement that I would rhapsodically praise it. I have not yet played something that required the C-stick, but it seems like a potentially useful addition. The screens seem brighter, the speakers are louder, and the cartridge slot is no longer positioned in a way that I will potentially dislodge a game cart during play.

It is going to take some getting used to having the stylus pop out from the front. It’s beyond foolish that an expensive  electronic device doesn’t come packaged with the adapter that charges its battery. Also, the shiny, shiny gold plastic is a fingerprint magnet. It is, however, a lovely object that I am glad to own. As more New 3DS-only titles are released, I hope to be even more excited to own it.

Now, please excuse me. I need to go catch some more Yo-Kai.