Look, I’m the person who pre-odered FFVII Remake from Game Stop just for the Shinra — 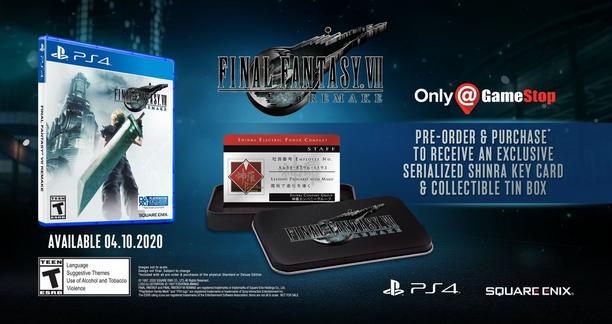 –wait…Key card?? When did THAT change? Goddamnit, GameStop.

I feel like I’m the person that this game was aimed to ensnare, which is precisely why this demo was so disappointing.

I loved the atmosphere, the character models, (much of) the dialogue, the dynamic and orchestrated music, and the delight of seeing the little Lego people transformed into actual people. I’ve been looking forward to this game for a long time, because I loved FFVII, and I’ve always wanted a more fleshed-out version of the world with a translation that made a bit more sense (I didn’t actually understand Cloud’s story until years later when I played Crisis Core).

However, I loathe the Remake battle system, and I’m a bit upset about it. It’s worse than FFXV’s system (a game which I would like to play but still haven’t for more than two hours because the system is so frustrating to me). Now, I’m a bit biased when it comes to these sorts of action systems, because I have tendonitis, and games that are not turn-based are very difficult for me to play, even with the controller I’ve modded for the purpose. Final Fantasy games are generally a delight for me, because it’s everything I want in a game paired with gameplay that doesn’t mess up my hands. So the idea of “updating” a classic turn-based RPG that I am able to play so well with this button-mashy nightmare is very irritating. I held out hope for the Classic mode, but that’s barely approaching actual turn-based combat, although I’m going to play through the demo again from the beginning with Classic mode enabled from the start to get a better feel for it. Playing it on Normal was a fairly miserable, slightly painful experience for me. The target-switching in particular is a very tricky maneuver with how I have to hold the controller, and it made the boss fight against the Scorpion tank an interminable, four-try slog.

Good question, Barret! The answer: slowly, painfully, and with a lot of loud cussing.

There are endless, fascinating permutations of turn-based systems. The interconnected stat management and optimization present in RPGs is most satisfying and evident when a battle moves slowly enough that you can appreciate the effects.

So who is this game for? Those who have a nostalgic glow for FFVII, as I do, presumably also have nostalgia for the turn-based combat. There are a lot of interesting updates Square could have made to FFVII’s original battle system without scrapping it all together. The kind of people who like action games, are they interested in this kind of beautifully rendered trip back to the 90s?

Hopefully I can get used to Classic mode, even though it just feels like button mashing with training wheels. I physically can’t play the whole game on Normal.